The inspiration for this design came from an original tapestry woven with wool and silk at Merton Abbey in 1887, designed by William Morris, Philip Webb and John Henry Dearle. Morris used birds and animals from earlier tapestries in conjunction with a dense cover of trailing acanthus leaves taken from his first tapestry "Acanthus & Vine" into which have been placed Philip Webb's five studies of animals and birds (Peacock, Hare, Lion, Fox and Raven)

Born on 24 March 1834 in Walthamstow, located in the London Borough of Waltham Forest, world-renowned British Heritage Artist William Morris is regarded by many as one of the greatest designers of his time, and one of the most outstanding figures of the Arts and Crafts Movement. Morris’ closeness to nature as a child would later prove vital in cementing his name as the biggest contributor to the revival of traditional British textile arts.

In 1861, he started a decorating business with a group of friends: Morris, Marshall, Faulkner & Co., would provide beautiful, handcrafted products and furnishings for the home. Morris’ works were inspired by the wonders of nature which he was surrounded by as a child at Epping Forest and later in his life, the nature surrounding his residence at the Kelmscott House; a homage to his previous home in the countryside, Kelmscott Manor.

Coupled with his desire to provide affordable ‘art for all’ and driven by his boundless enthusiasm, his decorating business had a highly prolific output of elegant natural patterns. Over the next 150 years the company, then simply known as Morris & Co., became the household brand for wallpaper and fabric design.

This watch is beautiful. The face design is gorgeous and elegant and the band is lovely too. Feels and looks high quality. Very quick delivery and nice packaging. 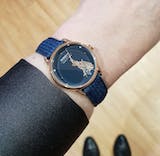 J
Jennifer Spears
I consider it beautiful and useful!

The watch is beautiful...high quality...just what I was hoping for. Very pleased. Thank you.

I absolutely love my watch. The colour is beautiful as well as the rose gold. Thanks!

I have always loved hares and also the work of William Morris. So when I saw this lovely watch advertised I just had to have it. The dark blue and rose gold is a lovely combination and it looks really good on my wrist!